I started to draft this on Tuesday morning, my body still aching from the weekend. I went from fourth string to second string and played seven games in two days. I finally played against my alma mater but I didn’t come away with the championship that I obviously, desperatly wanted because NorCal crowned a new champion.

There’s a lot to unpack. Let’s get into this.

Take a look at last year’s and this year’s NCQC Championship standings and tell me what you see.

Okay, that was a rhetorical request. The college teams all improved over last year’s performance, which means that the community teams all slipped a few spots. Before you start thinking that this proves there’s no need for a community/college split, shut up. There’s more to it than that.

The Skrewts managed to come within one snitch grab of defending their championship. They would have beaten two college teams to do it. If that had happened, we wouldn’t be having this conversation. But I guess we need to have it now before some people get dumb ideas.

These rankings only look at the top NorCal teams. The Blazers didn’t play in a single NCQC meet and the Skyfighters only made it to the first one, but in an area where there are plenty of community teams to choose from, I’m not too beat up about that. If I’ve learned anything about quidditch while playing in the Bay Area, is that if someone wants to start a community team, they will.

Part of the reason the Dobbys and Vipers slipped in the rankings is that they had better rosters last year. Both teams lost key players and now they’re in a rebuilding phase. I know they’ll be better next year, so a bad year for them is not as bad for quidditch as it would be for a college team. Sam Fischgrund may have superhuman recruiting skills, but colleges bring more people into this sport than he or any community team does.

Can you spot the Argonauts? Seabass Photography

It’s the young college team scene that worries me. Pacific and Humboldt State didn’t play a single NCQC match. Sacramento State is an unofficial team I’m terrified of losing if the pressures of an official team are too much for them. For those teams’ sakes, I still believe there needs to be a split.

The top three college programs are as old or older than the community teams. They grew up with the league and they have the institutional foundation to handle things like ref requirements. Coming to a post-USQC championship like this and seeing improvement over the course of a rough year (in the case of SJSU and Stanford) or taking the throne from a long-term powerhouse (hello, Cal) is the kind of momentum that will keep these squads excited about quidditch as they head into recruiting next season. If we want the sport to grow, we need these schools to have good recruiting classes.

That doesn’t happen if they end the year demoralized, so a win for college quidditch is a win for the sport as a whole. While it may seem silly to keep playing after nationals, Stanford and SJSU, the two schools who support the running of NCQC with the most fields and volunteers, got to end the year on a high note. That doesn’t happen if they had hung their cleats up in February after losing at regionals. I can’t wait to see how they keep this upward trajectory going next year.

Internal monologue: “I am a Skrewt now.” M.Vong Photography

Okay, that’s enough reasonable, big-picture thinking for a bit. Time to get a little more personal. While I was rostered for the last Skrewts/SJSU game, my ass was firmly planted on the bench for that game. This time around, that was not an option.

I can’t complain about being bumped from fourth to second string because Anna and Kim played beater and chaser with no subs at all. (Ah, the boundless energy of youth.) The Skrewt part of my brain kept yelling at my SJSU and Argonauts internal cheering sections to shut up and focus on beating them, not being proud of them for outplaying and outlasting me.

When we beat them by only a 20-point margin, all I could feel was relief. I didn’t want to be on the team that broke the Skrewts win streak against SJSU. I really am a Skrewt now.

Anna mocks my weakness and my need for a sub. Kim’s game face terrifies the weak. Can’t wait to be back on the same team with them this summer. Seabass Photography / M.Vong Photography

I don’t believe in preemptively making excuses about low roster numbers. I think it’s bullshit. It shows how little you believe in the people who do show up and it’s a cheap way of lowering expectations. You win as a team and you lose as a team, period.

That being said, after a tournament, it’s totally fair to analyze how the games were played based on who was there and who was not.

So let’s talk about the three-game gauntlet against Cal. Sam Harris is still in China, Natalie is in Portland for work, Clike was visiting her (and is recovering from an injury at Regionals anyway), Abby is in Denver learning to lawyer, Caroline was sick and in Texas, Ham was training for work, Steven and Tyler were at work… anyway, you get the idea. We’re an adult community team and a bunch of us were off adulting.

But that’s still not an excuse. Cal was missing key players like Connor Hughes, Jonah Phipps (see? I remembered this time!), and everyone else who put studying for finals over quidditch. Anyway, you get the idea. They’re a college team and a bunch of them were off colleging. So, they bumped a bunch of the Golden Snitches up to the A-team and those kids delivered.

The takeaway: if either team had said anything about small numbers beforehand, it would have cheapened the excellent games we played against one another. I’m glad both our squads are better than that.

I almost wish I really was retired so I could have watched that three-game slugfest. Those games were the most intense matches I’ve ever been a part of. There was a championship on the line and the margin of victory in each game was close. It must have been fun to watch.

Well, except maybe for Game 3. That was a recreation of the US Quidditch Cup 10 final. Cal and the Skrewts watched that last month, so obviously we had to do everyone at home the favor of recreating it. Because you know, holding onto the quaffle and waiting for someone to catch the snitch is exciting. At least I got to play keeper again? Gazing into the setting sun and clinging to a quaffle feels poetic when you consider how it all ended.

A New Champion, A New Era

I’ve been playing quidditch in NorCal for four years. In all that time, the Skrewts have always been the team to beat. So when I say that a new era of NorCal quidditch has begun, I don’t think I’m exaggerating. As disappointed as I am as a Skrewt that we couldn’t defend our title, as a fan of stories in quidditch and sports in general, this is exciting. 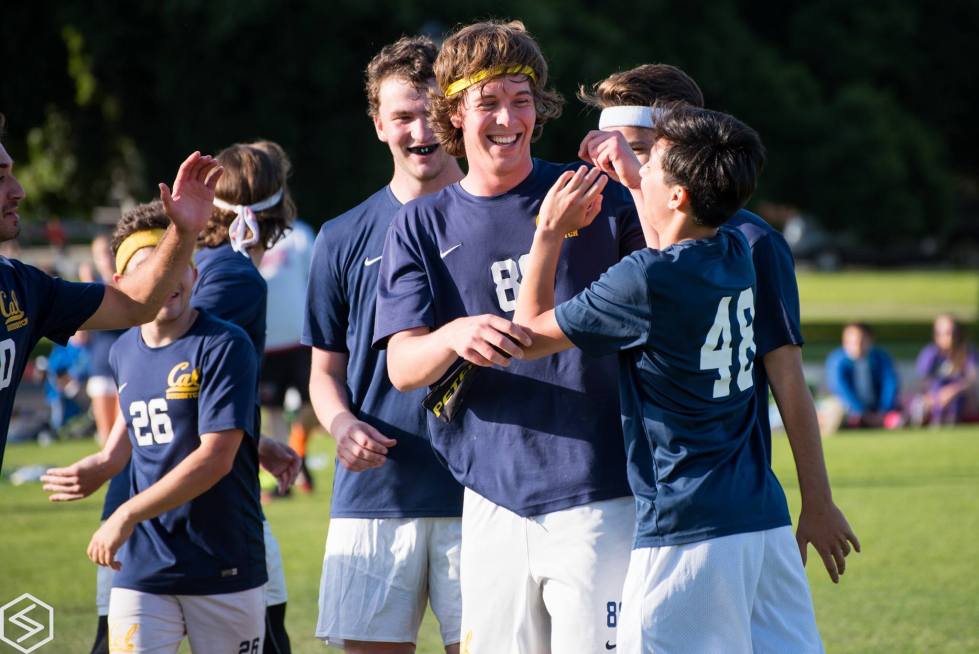 Last year, Cal had an amazing recruiting class that propelled them from worst of the three major NorCal college programs to the only one that qualified for US Quidditch Cup 9. However, they lost to the Vipers twice and had to take the Skrewts to OT to get a win in their only matchup that season. The big story in NorCal quidditch was Skrewts vs. Vipers while Cal’s resurgence was an afterthought.

This year, Cal dominated the conversation. (Just go look back at all the quidsecrets about them.) Everyone wanted to know about them. So they showed up at US Quidditch Cup and showed the whole damn world that Bears are better than BearSharks. Then they came back home and took care of business.

And look at all the lovely social media impressions it got. Do you think Cal, one of the top public universities in the world, a well-known brand in college athletics, and a school with a Twitter account with 108K followers would care if some community team with an old-school Harry Potter name had beaten their team? (For reference, USQ’s Twitter account currently has 3147 followers.)

This is how people hear about quidditch. This is how the sport grows.

Enjoy your championship, Cal. You guys absolutely deserve it. But remember; we were 2-2 with you guys this season, and defending a championship is harder than winning it the first time around.

As for me, I’m happy the target is off my team’s back. I’m happy I can shake off the feeling of having everyone come gunning for you. I love comeback stories. I’m looking forward to being a part of one next year.

My feelings about being drafted in the third round are summed up by this former gubernatorial candidate:

I may have already promised to stop saying I’m bad at quidditch, but the last thing I needed after playing four games was playing three more the next day. I was gassed for our last game against Cal and I wasn’t any better the next day. I’m sorry I didn’t play like a third round pick should, purple team. Next time I’ll be better. Or drafted lower.

Though I may have spent the day indulging in feeding my God complex in the way that only TDing a fantasy tournament can, Hella wouldn’t have happened without two people: SJSU’s Matt Ignao and Derek Zeng. Matt’s too humble and believes that when a TD does a good job, no one notices. He’s right, but I noticed anyway. You all should, too. Matt got to the fields made sure the pitch was set up while I was lollygagging with the Lost Boys. He kept his cool when my alma mater’s delightful bureaucratic mess threw a curveball at him and said the quidditch team was missing paperwork that they needed to use the fields. If Derek hadn’t hustled to club sports and filled it out, you all wouldn’t have had a field to play on.

This is the first year I ended the season unsatisfied with myself. Even after my worst season, I ended it on a high note; I started Hella Fantasy and began laying the groundwork for NCQC to be more than a spreadsheet tracking scores.

This year, all I can think about is how much better I could have been if I hadn’t played Achilles in his tent for half a season. I still ache everywhere and I am exhausted because I didn’t practice all that much and my conditioning is non-existent. You can get away with not having much endurance when you’re fourth-string, but not when you’re the only sub. I also made dumb mental mistakes that practice could have solved.

See you all next season. 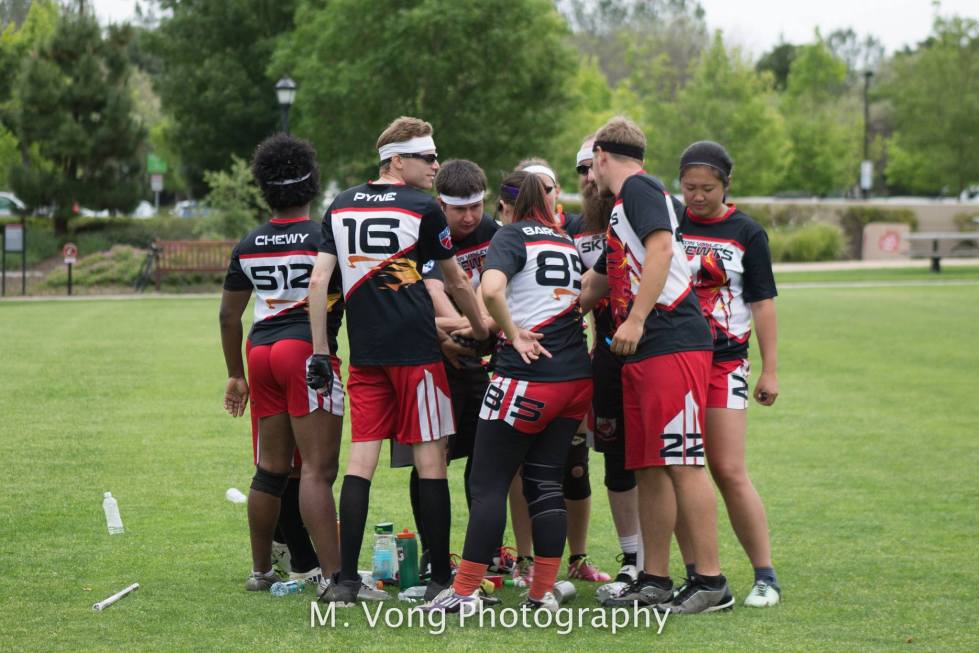 It’s been a wonderful ride with these nerds. Next year I won’t get off until the end. M.Vong Photography

← #BarcelosClothes: StitchFix Box 1 + 2
How to Use Quidditch to Start Your Career Without Sounding Like a Complete Nerd →

2 Comments on “NCQC You Next Year”