Most of my style content last year was Stitch Fix reviews. I thought about rehashing a year’s worth of them and calling it a day. But because I’m me, I decided to trash that draft on Tuesday morning because I had a better idea.
Instead, I’m taking a broader view of what I liked (and didn’t) as I head into a new year with a (slightly) more adult wardrobe.

What I learned about my style this year:

This was probably my biggest takeaway of the year. All the ease of pulling on a pair of regular jeans, but it looks like you’re actually trying! I’ll never be the type of minimalist who can pull of a capsule wardrobe because I just love color so much. This was a fun way to incorporate it. These aren’t even all the colored pants I own now!

Color of the Year: mustard yellow?!

Okay, while last year’s Color of the Year was officially Greenery, my personal choice was one hop over on the color wheel. I never really liked yellow much before now, but boy do I miss that scrunchy yellow cardigan I’d had for a few years now that it’s gone to the great big Target store in the sky. Combined with some pieces in a few Stitch Fix boxes (a blouse, ballet flats, and a purse) I learned to love this color a little more.

Something old and something new

I kept returning to two basic pieces as my main outer layer. I guess you could call them something old and something new. (They’re both blue, though.) 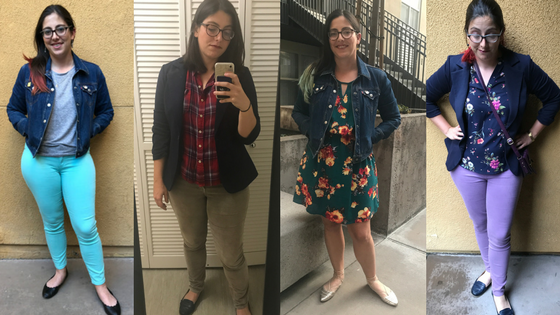 I’ve had this denim jacket for years now. It was oversized in my early twenties and a bit more fitted now, but I love that I’ve owned something for that long that continues to get a lot of good use. I never have to worry about wearing a Canadian tuxedo since I’ve been wearing blue jeans less and less, but it’s also good for dressing down… well, dresses.

On the other hand, this blue blazer came in my first Stitch Fix and it has been a staple ever since. It does the opposite job that my denim jacket does: it instantly dresses an outfit up. It’s an easy way to adultify the wardrobe I already have and it’s just as easy to pull on as a hoodie.

The Tulle Skirt Experiment was a really fun post and really need to do something like this in the coming year. I thought about trying the cold shoulder trend when this top came in one of my Stitch Fix boxes, but I think the look on my face explains why that didn’t happen.

One thing I’m especially proud that I learned to do after some experimenting was mix prints. You’d think you couldn’t pull off stripes, polka dots, and a floral print… but I did!

I have a lot of cool pieces but I feel like I lack basics? I also feel a little overwhelmed with what I do have. Even though I did a closet purge last January, I still have things I don’t wear taking up valuable real estate in my tiny apartment. Expect another purge soon.

I’m also looking forward to doing more beauty stuff on my blog in 2018. I started getting into makeup and skincare over the past year as a combination of self-care and wanting some control over my appearance as I felt my weight getting out of control. While I’m working on the latter, taking care of myself (and making myself believe that I’m pretty, dammit) is something I have always had a fraught relationship with.

Fashion/style/beauty/shameless materialism has been the second most popular thing on my blog this year, so I want to thank all of you who’ve read along over this past year. I’ve always been a person who has struggled with appearances, so being able to share this with loyal readers who don’t just come here for my sportsball takes means a lot to me. Thank you so, so, so much.