Okay, maybe I’m not so uncool as I am incapable of having any chill. And yet, here I am, seduced by the effortless Cool Girl aesthetic that is Glossier.

But first, some background

I was a raging tomboy in my youth. Part of it was that I genuinely liked sports, part of it was despising the constraints placed on my gender… but part of it was feeling like I was ugly and deciding that I had to reject all pretty, girly things.

Now I’m a thirty-two-year-old woman who has come to accept that I can watch hockey, play nerd sports, and watch an outrageous amount of beauty bloggers on YouTube. I contain multitudes and all that.

While I have embraced my many identities, one has remained elusive: the Cool Girl. I’m a perfectionist but the Cool Girl is effortlessly perfect. I, on the other hand, put in a lot of effort and demand that my effort be acknowledged. Give me gold stars, damnit.

When Glossier had a Black Friday sale (yes, that is how long it has taken me to write this), I decided to take that 20% off and put some effort into being effortless by picking up the Glossier Phase 2 Set. It came with their Stretch Concealer, Boy Brow pomade, and your choice of Generation G lipstick. I was feeling bold, so I went for Zip, which they described as a poppy red.

Look at this. Look at it. 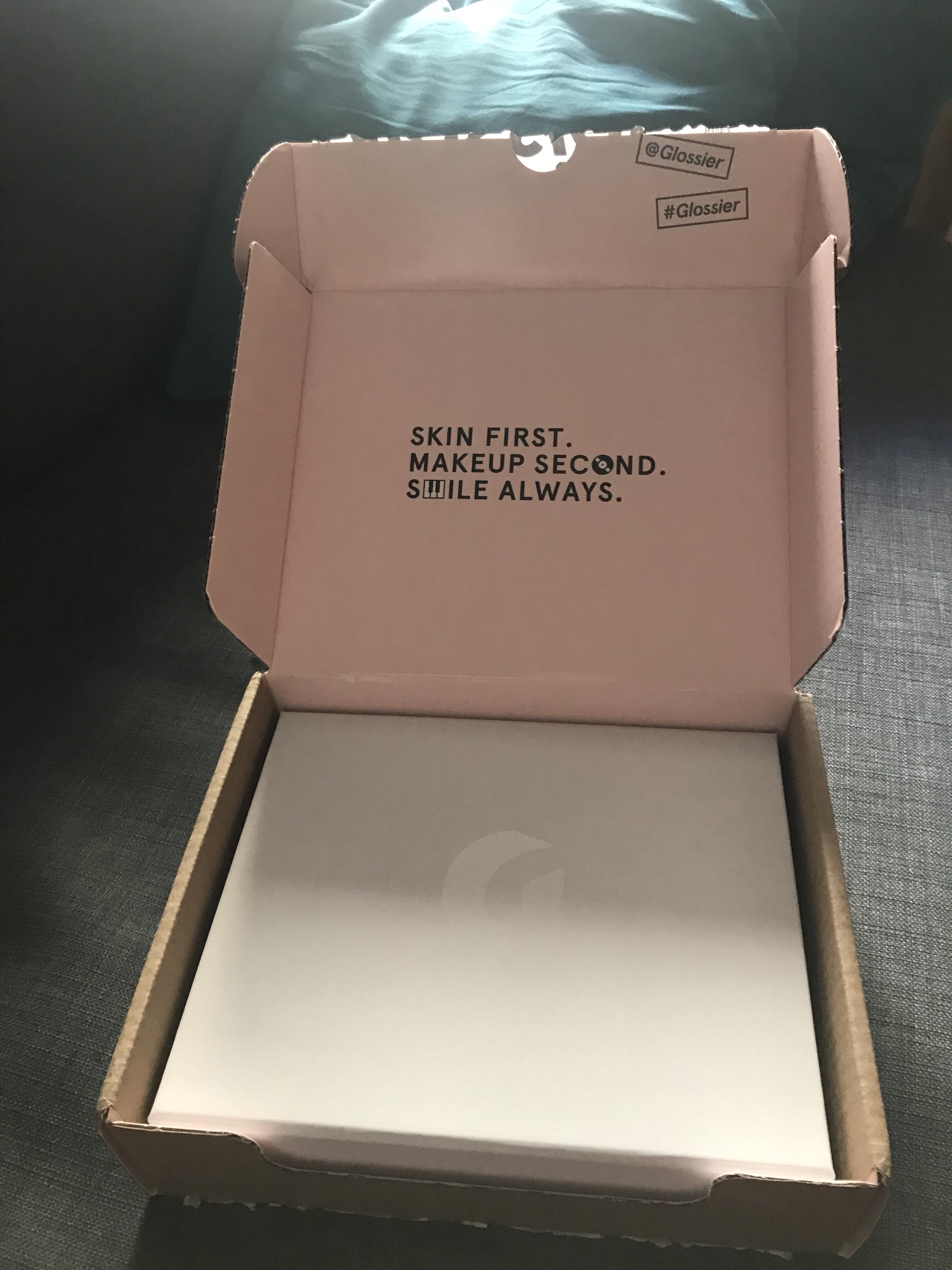 It’s like a Russian stacking doll of Millennial pink and white and silver and effortless minimalism. Everything about it just says, “You wish you were this cool.”

And you know what? I do. The outermost box got chucked in the recycling bin, but I kept the white box and pink bag to store things. What things? I don’t know yet, but they’re too pretty not to keep.

Putting it to the test

For the first test, I decided to embrace being effortless and low maintenance. I started with a blank face.

My dark circles are no joke, people. Even when I sleep well, the Barcelos genes are strong with me. My dad has them and such is my lot in life to take after him. While that means I look far younger than I am, it also means that I look like I never sleep.

The deepest inner corners are still a little dark, but you need full-coverage, industrial-strength concealer to cover those and I hate how that stuff feels. And no concealer in the world is going to make the bags under my eyes go away. I didn’t expect wonders and so I came away happy with the result.

I liked how unfussy Zip was to apply, but I probably used too much Boy Brow so my eyebrows felt very Groucho Marx.

After a little googling, I learned that Boy Brow has a tendency to over-apply when it’s fresh, so I used a lighter hand this time around and was much happier with the result.

Ignore my mildly crusty lips; it was another failed attempt at liking liquid lipstick. This time around, I decided to test the Stretch Concealer against my go-to concealer: Benefit’s Boi-ing Airbrush Concealer.

I had to look back at my notes to remember which eye had which concealer. Glossier’s was on the right and Benefit’s was on the left. I can’t tell the difference; can you?

Weirdly enough, one of my favorite things about the Generation G is how it wears off.

While wearing any other red lipstick, I’d be terrified of eating and drinking because I’d make a mess of my face. Liquid lipsticks crumble and regular bullet lipsticks tend to smear off my lips and onto my face when I eat. I never learned how to taky tiny, ladylike bites, okay?!

But Zip just… disappeared. Which I was fine with.

Why? Because then I could just whip it out of my purse after I finished eating to reapply it. No going to the bathroom for a mirror or using my phone as one.

It’s not a vampy red. It’s not a dramatic red. But it is an easy, everyday red, and that is what I was in the market for.

All I need to apply either of these is a finger. Sometimes I set them with a little powder, but I usually don’t. Tied.

Another draw here. Surprise surprise, two formulas that feel the same go on the same and hang around for the same amount of time.

I got the Stretch Concealer in a bundle, so let’s take that into account.

As you may have noticed earlier, I’m a sucker for these details. Both concealers come in little pots. But while Benefit has cutesy pink packaging, Glossier in its glass pot and silvery cap feels more expensive while actually being cheaper.

And the winner is…

Stretch Concealer. They’re basically the same. Boi-ing is just a smidge more expensive, and the Stretch Concealer is even cheaper in a bundle. By the time I finish this thing, I’ll probably need another Boy Brow. Might as well pick up another Generation G while I’m at it, right?

The rest of the set

I went from being terrified of this stuff to using it every. damn. day. once I got the hang of it. (Or at least, every day I wear makeup.) I’ve decided to stop waxing my eyebrows for the time being, and this stuff keeps them tame.

But I have yet to use any other tinted brow gel or pomade, so do I love Boy Brow or brow taming products in general? Jury’s still out.

Scared of red lipstick? This could be for you. However, there are some caveats. This red is easy because of how sheer it is. If you want something bold, apply lots of layers or apply elsewhere.

The packaging also left a little to be desired for the price tag. On its own, the Generation G is $18. If I’m paying almost twenty bucks, don’t want something that’s gonna fall apart in my purse.

It works well enough in its detached state, but come on, Glossier. Be better.

Okay, I get the hype now. For the most part, anyway. I don’t know why someone would pay $60 dollars for a Glossier sweatshirt, but I am definitely buying into the effortless Glossier Girl look. (Another word for effortless is lazy and I am all about being lazy.)

One thing that sucks about buying makeup online is that you can’t see it in person to figure out if it suits you. I’m not about to go to Glossier’s NYC showroom just to see what other $18 lipsticks suit me. I lucked out with Zip, but I’m not sure I want to risk that again.

Except that I don’t have to! Glossier opened up a pop up in San Francisco. By the time I post this, I’ll be way up to the city to check it out and pick up some things. Stay tuned for a Glossier update next month!