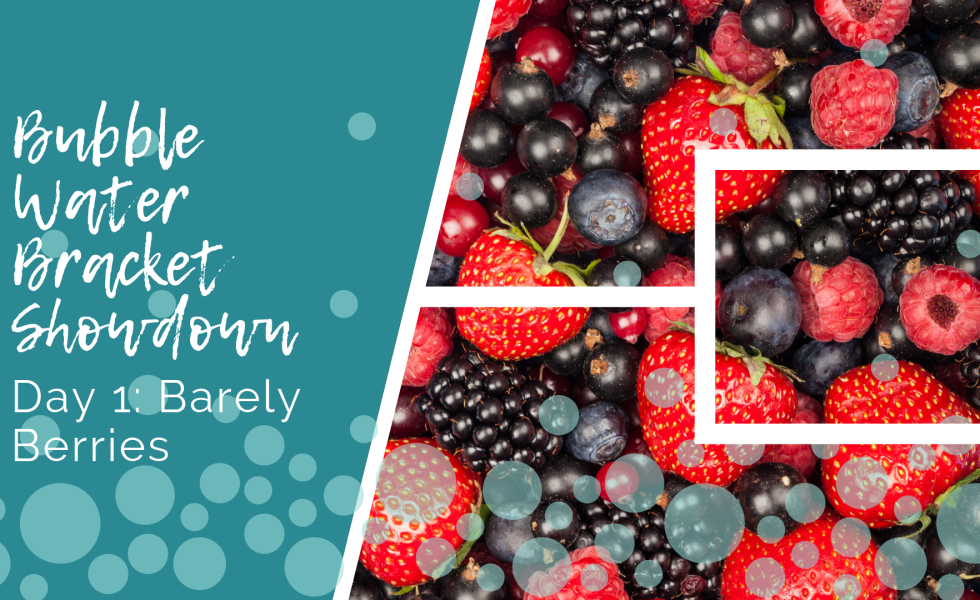 I haven’t watched college basketball for years, but I’m still itching to get into March Madness somehow. Over the next week, I’ll be pitting sixteen flavored and/or essenced (What is the difference, anyway?) against one another in a bracket of my own.

Today, four barely berry bubbly waters enter. Only one will make it to the finale on Friday.

LaCroix and other sparkling waters of its kind get an unfair reputation for not tasting like anything. (Okay, that might be at least somewhat true and my palate has been dulled by downing a near constant stream of sparkling water over the last year or so.)

However, LaCroix Berry… actually is boring. It’s a bland and generic berry flavor, so at least it’s exactly what it says on the tin?

Bubly is a recent addition to our fridge at Casa Gold Bar. On first sip, Jim and I almost wondered if it was too flavored. (Okay, yeah, maybe our palates are ruined.) There’s no sugar in it, no calories, and yet it manages to taste sweet. Juicy, even.

I last wrote about Cran-Raspberry back when I was a sweet summer child who had only tried six kinds of LaCroix instead of the dozens of tiny bubbles that have come and gone from our fridge. It’s a bit tart, but more than that, I’d describe it as dry.

Bubly Raspberry, like it’s Blackberry counterpart, tastes juicier. I don’t know what sorcery Bubly has in their methods of flavoring that LaCroix lacks, but it’s making me want to branch out into their non-berry flavors on my next Target run.

Also, Bubly cans are stinking cute. While I love the 80’s aesthetic of the LaCroix cans, the tabs of Bubly cans have adorable little messages. Point, set, and match, Bubly.

These two upstarts took out their more established competition, but their cute cans can’t save them now. In this case, Blackberry has the edge. It did a better job of convincing me that it was juicy and sweet despite lacking any juice or sugar.

With today’s corner filled, we’ll be jumping to the other side of the bracket tomorrow. Come back Tuesday for a slightly citrus showdown!